Annual General Meeting and the National Members Council May 2016

It doesn’t seem a year ago, that I was at my first annual general meeting under our new rules and wrote my first blob.  But nine blogs later, I'm blogging about my second members AGM.  In the past the AGM was a delegates only event, with only elected members attending and casting their vote. As the Chair of the SW Region I often voted on behalf of over one million members. I not sure how I managed represent all their views but that was the system then. Following changes in our rules, the AGM is now open to all members.

This year I guess we had over 800 members in the hall.  Not all could vote, as the Council has decided that members need to trade with the Co-op to be eligible to vote. This year the Council set the barrier at £250 in one calendar year.
I arrived early to the meeting so I could attend a briefing session from Ian Ellis our Finance Director. He was briefing Council members on the annual accounts and answering any questions that we had. Ian had already given out a lot of information on our accounts in the April Council meeting.  If your interesting the link to our annual accounts is here.

The session was an informal one and questions ranged from how many surplus buildings the Co-op had on their books to what plans did we have to expand into new markets.  Ian has a very open approach and shared information with the Council in a similar way. The session gave me a greater insight into the finances of the Co-op and reassured me that I had the information and knowledge to perform my role of holding the Board to account. 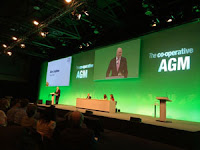 Outside the formal AGM hall, the Co-op market street was set up, with stands and exhibitions showcasing the best of the Co-op.
We had stalls representing all our businesses as well as Fairtrade and membership stands.  Once again the enthusiasm of the Co-op colleagues working on the day was amazing.

The AGM by its very nature is a formal meeting where members vote on a number of items.  But we had set piece speeches from Richard Pennycook, our CEO, Alan Leighton the Chair of the Board, Stevie Spring the Chair of the Remuneration Committee, Nick Croft the President of the Members Council and Lois McClure the Chair of the Co-op Young Members Board.

All the speeches were excellent, and the whole AGM can be viewed online by clicking here. I will comment on just two of the speeches.

Remuneration of top executives always creates a conflict. On one hand I want high quality people to run the Co-op and to make it successful and on the other hand there is a market for such people and if we are to attract them, we need to pay them a lot of money.

So when we discussed the remuneration report Stevie Spring reported that in the last two years our lowest paid staff have had a 8.6% pay rise, and that the CEO had taken a 60% pay cut.  Progress at both ends of the spectrum.

The other speech was from the Chair of the Co-op member’s youth board.  Lois was inspirational and I urge you to take a look at the 5-minute speech by clicking here.  She passionately declared that young people want to get involved with the Co-op and that we need to ensure that young members voices are heard at every level in the Society.

We elected new Directors to the Board – New faces include Victor Adebowale, and Margaret Casely-Hayford. Have a look at this piece from the Co-op News for a report of the formal part of the meeting.

After the formal meeting Richard Pennycook revealed two important changes. One to the brand, we are going back to our past and becoming Co-op again.  I have to admit, the strategy is a bold one, and there was a great buzz in the room when the new brand was revealed.  The second important announcement was that the new membership offer. Members will now earn members 5% off co-op branded goods plus the co-op will donate 1% to a community pot that local members will be able to vote to distribute for local causes that they have decided themselves.

New cards will be issued to all members in the Autumn, so look out for them.  This is a product of making membership meaningful again, and I think members will really engage with this new offer.  The next challenge is for channel where our  members voice can be heard at all levels in our Society.

On the following day the National Council met.  We welcomed twelve new Councillors who were elected for a three-year term of office. Here are the results.

We discussed the urgent need to get our local members groups up and running. Dan Crowe and Cheryl Marshall outlined what had been achieved in the pilots which have been running since September 2014.  Theresults have shown that most of the local forums have given members an opportunity to engage with the local stores and this had resulted in increased trade in the stores.  So we are asking the Board to fund another 150 groups this year and 300 next year, with a long term aim of 1500 by 2020. 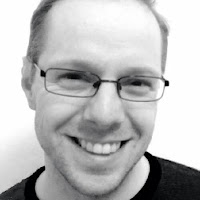 Finally, Jim Cooke came to talk to the Council about the Co-operative Foundation. This is the charitable arm of the Co-op that used to distribute funds from our member’s spare pennies from their Dividend. It currently has assets of around £12m but with the demise of the Dividend, at least for another two years, it has little income.  I found out that Alan Leighton the Chair of the Board, donates his fee to the Foundation – Well done Alan.

Jim outlined that the Charity is run by Trustees who are appointed by the Council, the Board and some independent Trustees. The five-year vision for the Foundation will be to focus on young people, and on youth loneliness, picking up a theme from our Red Cross charity partnership.

The Council meets again in early July and I hope to post my next blog then. In the meantime, if you have any questions or comments please drop me a line.