The Aprils Council was all about planning for the AGM of the Society in May.   We met in the Federation building, which the Co-op had converted into a digital hub.  First up was Alan Leighton, Chair of the Board of Directors.

“A Community of digital businesses and innovators in Manchester built on ethical values.  Click here for more information”Alan felt this statement represented allthat he felt about the Co-op.

Digital Businesses and innovators. This represents the best of the Co-op. The Co-op were the great innovators in the 19th Century and were the cutting-edge businesses at the time.  His mission for our Co-op is to make us great businesses again.

In Manchester, the spiritual home of Co-operation.

Alan let us know that he believed the Co-op was in pretty good shape. Things were going according to plan, and if things were on plan, he believed the Co-op was on the road to recovery.  Yes, somethings were not so rosy. The Co-op is being investigated by the Grocery adjudicator. (click herefor more information), and we should have never got into that situation. These things should not happen, and it was his view that its how you deal with it, that matters in the end.. He vowed that the outcome from this will be that the Co-op becomes the leading retailer in supplier relationships in the future.  When things go wrong, learn the lesson, fix it and then become stronger.

Alan touched on membership. Our new membership has brought new members, but most of these are shoppers who have signed up to what they precieve is a new loyalty scheme. He wants to build a relationship with those members who get what the Co-op is about.  He felt that the 1% offer was the most important part of the new proposition as this channel our Co-op support direct to local communities.

He also highlighted our ambition to increase the number of Co-op school academies to 50.  Our track record when we bring a school into our academy programme in second to none. Clickhere for more information.  The Co-op has an opportunity to work with young people, give them a good start, integrate job opportunities with our businesses.  Co-ops always pride themselves in education and this is one way where the Co-op can make a difference to young people’s lives. 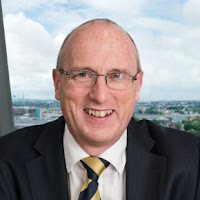 Ian Ellis took us through the financial highlights from the previous years.
Stronger Communities@ £61m earned by our members, £13m for local communities.
Stronger Co-op.  Revenue flat at £9.5bn   Profit before tax £62m, operating profit £126m
Food 3.4% increase in like for like sales.  Funeral and life sales up 4% Insurance sales up 3%
For more detail click here.

Stevie Springs Chair of the remuneration committee, talked us through the report that would be presented to the AGM. She stressed that although much of the attention will focus on executive pay, her priority was to improve the hourly rates to our front-line colleagues.  Wages have risen, and she felt that this was the better way to reduce the pay ratio between the highest paid colleagues and the lowest paid ones.
She also touched upon our gender pay gap.  She felt our problem was that there were not enough women in senior positions not our pay policy.  Progress is being made, for instance our Executive Committee has a majority of women, but progress needed to be speeded up. I agree

Simon Burke, Chair of the Risk and Audit committee outlined the mechanisms for identifying and moderating risk in the Co-op. Like all systems, there are not infallible, and he acknowledged in the case of the Grocery adjudicator, the systems had failed.  However, he felt that the Co-op was in a much better place now to mitigate risks.  The Co-op had invested resources into management, in our risk teams and in internal audit to ensure that we minimise our exposure to risk in the future.

Overall, I came away feeling that the Co-op is on the right track and I am looking forward to the AGM in May in Manchester. Please try to attend this meeting to see for yourself the progress we are making as a Co-op.